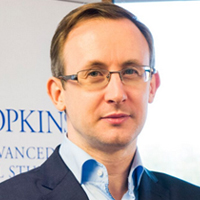 William Hynes is the Head of the New Approaches to Economic Challenges (NAEC) Unit in the Office of the Secretary General at the OECD. NAEC crafts a systemic perspective on inter-related global challenges, develops new analytical tools and techniques to understand them and narratives to convey them to policymakers and the public. He previously held the Senior Economist position in NAEC and acted as an Advisor (G20 Finance Track) in the Sherpa and Global Governance Unit. Between 2009 and 2014, he was a policy analyst in the Development Cooperation Directorate working on issues such as Official Development Assistance, Aid for Trade and Green Growth and Sustainability. Prior to this Hynes was an Economic Affairs Officer in the Office of the Deputy Director-General and the Trade and Finance Division at the World Trade Organisation.

He holds a doctorate from Oxford University and was a Marie Curie Fellow at the London School of Economics. He has lectured at Sciences Po, Wadham College, Oxford and Trinity College Dublin.
In the News
Building Resilience will Require Compromise on Efficiency
Development
Economics, Finance, & Trade
Energy, Environment, Climate, & Technology
New Approaches To Economic Challenges (NAEC): The Critical OECD Think Tank
China & Asia
Development
Economics, Finance, & Trade
See all In the News