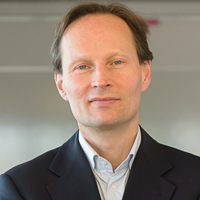 bvanderzwaan@jhu.edu
Energy, Environment, Climate, & Technology
Bio
Bob van der Zwaan is Adjunct Professor of Energy, Resources and Environment at SAIS Europe
Principal Scientist at the Energy Transition department of TNO in the Netherlands, and Professor of Sustainable Energy Technology at the Faculty of Science of the University of Amsterdam

Bob van der Zwaan was visiting senior research scientist at Columbia University’s Lenfest Center for Sustainable Energy (Earth Institute) in New York (2007 to 2013). He is co-director of the International Energy Workshop (IEW), member of the Council of the Pugwash Conferences on Science and World Affairs, and lead author for Working Group III of the Intergovernmental Panel on Climate Change (IPCC, 4th and 5th Assessment Reports). He held several visiting professorships, most recently at the Royal Institute of Technology (KTH, Stockholm, 2010) and the Kiel Institute for the World Economy (IFW, 2008), and held research positions at Harvard University (Cambridge, 2002-2005), the Vrije Universiteit Amsterdam (1999-2001), Stanford University (Paolo Alto, 1999-2000), the Institut Français des Relations Internationales (IFRI, Paris, 1997-1999) and the European Organization for Nuclear Research (CERN, Geneva, 1992-1995). He was trained in economics (MPhil, 1995-1997, University of Cambridge, King’s College), physics (PhD, 1991-1995, CERN/NIKHEF, University of Nijmegen; MSc, 1987-1991, University of Utrecht) and international relations (Certificate, 1993-1994, IUHEI, University of Geneva). His research includes the fields of energy and climate change, integrated assessment modelling, environmental economics, and technological innovation. He is (co-)author of over 140 peer-reviewed scientific articles (4300 citations, h-index=38), and contributor to about a dozen books. For a full list of publications click here
In the News
OPERA: a New High-Resolution Energy System Model for Sector Integration Research
Energy, Environment, Climate, & Technology
See all In the News


This course will focus on the inseparable links between energy use and climate change and, consequently, the unavoidable connection between energy and environmental policy. Through an examination of the subject, we also hope to explore three closely-related themes that exemplify the complexity of the interaction between science and technology on the one hand and public policy on the other hand: the challenges of achieving political acceptance, both nationally and internationally, of scientific consensus in the face of ever-present scientific uncertainty; the extent and the limitations of science as a driving force for public policy; and the role of technological development in influencing political choices. (ERE)