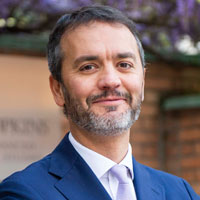 Dr. Taddei's academic research focuses on macroeconomics, international finance and the relationship between the labor market and the pension system. For his academic contributions, he was awarded the Lamfalussy Fellowship by the European Central Bank and the Young Economist Award by the European Economic Association. He teaches macroeconomics and international finance.