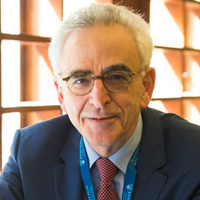 His research, writing and public speaking focus on the future of the EU, Brexit, enlargement, neighborhood policy; Turkey's relations with the EU, Europe's response to political change in the Mediterranean and Middle East; energy questions in the eastern Mediterranean; public opinion and foreign policy. He also has an interest in Asia-Pacific and its relations with Europe. He writes and comments regularly on European affairs for Geopolitical Intelligence Services reports online, Euractiv and other media.


Since the global financial crisis in 2008, some of the most senior political figures in Europe have predicted the EU’s coming collapse or disintegration. A succession of crises (the euro, migration, Brexit, Covid-19) appeared to vindicate such predictions. But others claim that European integration has always advanced through crises and see a bright future for Europe through a "green recovery" from Covid-19, the building of a digital single market, and a robust industrial policy, enabling Europe to compete more effectively with global rivals.

In this course, Dr Leigh will draw on his experience as a senior EU official and policy analyst to disentangle these apparently conflicting claims.

1. What drove European integration during its formative period and enabled such breakthroughs as the creation of the single market, the launch of the euro and enlargement from 6 to 28, now 27, member states?

2. What challenges have hindered the process of European integration and prevented it from achieving its full potential? This section of the course will examine the rise of euro-skepticism and populism as well as "state capture" in central and eastern Europe and their implications for the future of "the European project." It will focus on Brexit and the risk of secession from the EU, or the eurozone, by other European states.

3. How is the European Union likely to evolve over the next decade? This part of the course will provide students with an opportunity to draw on insights gained through their work at SAIS-Europe and elsewhere to develop alternative scenarios for the EU’s future.

Classes will involve lectures, discussions, presentations by guest speakers and by students, a scenario-building exercise and a simulated negotiation. The exercise and the simulation will be adapted to conditions in Europe in spring 2021. If it is necessary to conduct them partly or entirely online, we will evaluate the impact of physical distancing on negotiations among the member states and on creating a sense of a common European identity.