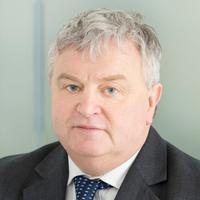 Cummins is in charge of the business growth for Future Cities including, Urban Regeneration and Clean Energy. These two strategic sectors provide solutions to social and economic issues as well as delivering significant shareholder returns.

Cummins was previously Group Treasurer of RBS from 2007 to the end of 2016, where his main responsibilities included liquidity, balance sheet management, capital planning, long and short term funding, as well as interest rate and foreign exchange rate risk. During this period he oversaw a reduction in all wholesale funding from £450bn to £70bn and was heavily involved in restructuring RBS' group balance sheet as well as building its liquidity portfolios to around £150bn. In addition he ran various group wide programmes including preparations for ring fencing, the Scottish referendum, BREXIT and Libor remediation. Prior to joining RBS he was Group Treasurer at Standard Life, where he spent over ten years. John served as Director of IFFIm (International Finance Facility for Immunisation) from 2005-2012 and raised over $4bn for vaccines in the developing world. Cummins has an MA in Modern History from Oxford University and an MBA from Bradford University.