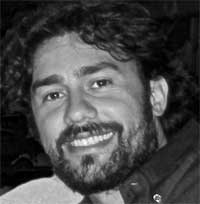 Gabriel Echeverría is a political scientist with a BA in International Relations from the University of Bologna and a PhD in International Migration and Social Integration from the Complutense University of Madrid. His research interests have focused on those phenomena that somehow defy traditional social and political institutions. In this respect, international migrations appeared to be a key phenomenon. Their "subversive nature" and their "productive challenge" not only force categories to be rethought, but, in so doing, stimulate the opening of new potentialities, the space for a reformulation of paradigms and behaviors. His doctoral research project inquired into the experience of irregular migrants in different contexts and combined a social systems theoretical approach with empirical research methodologies. The results of this work were published in 2020 in the IMISCOE/Springer open access book "Towards a systemic theory of irregular migration. Explaining Ecuadorian Irregular Migration in Amsterdam and Madrid." Other topics of interest and publications have been citizenship and Latin American studies. Since 2017, Echeverría works as researcher and instructional designer at the International Cooperation Centre (Trento) where he is responsible for the development of the e-learning program. From 2020, he works as a ERC post-doctoral researcher in Trento University.
Selected Publications
Towards a systemic theory of irregular migration. Explaining Ecuadorian irregular migration in Amsterdam and Madrid
Springer (2020)
Security, Strategy, & Statecraft
What Do We Talk when We Talk about Migration Regimes? The Diverse Theoretical Roots of an Increasingly Popular Concept
with M. Cvjner and G. Sciortino, in Was ist ein Migrations regime? What Is a Migration Regime? A.Pott, C. Rass and F. Wolff (editors), Springer (2018)
Security, Strategy, & Statecraft
Beyond Instrumental Citizenship: the Spanish and Italian citizenship regimes in times of crisis
with C. Finotelli and M.C. La Barbera, in Journal of Ethnic and Migration Studies 44:14 (2018)
Security, Strategy, & Statecraft
So close but yet so far? Labour Migration Governance in Italy and in Spain
with C. Finotelli, in International Migration 55:S1 (2017)
Security, Strategy, & Statecraft
Between Territoriality, Identity, and Politics: The External Vote of Ecuadorians in Madrid
in Identity and Migration in Europe: Multidisciplinary Perspectives, M.C. La Barbera (editor), Springer (2015)
Politics
See All Scholars' Publications
Courses


The course offers an interdisciplinary overview of society, culture, and politics in Latin America. Its aim is to cover the basic interpretive frameworks that have been employed to analyze the complex evolution of Latin American societies from colonial times to our days and to outline the main contemporary challenges in the continent.

The course is intended both for students that are approaching Latin America for the first time and for those who have previous academic or personal knowledge of the area. Although it could be advantageous to have familiarity with some political science concepts and terminology, no previous specific knowledge is required.

The course is divided into two main parts. The first part (weeks 2 to 7) is chronological and will cover the historical developments in Latin America from the European conquest to the present days. In this brief journey across time, selected national cases are going to be used either to exemplify more general trends or to underline, when is the case, particularly significant peculiarities. The second part (weeks 9 to 13) is topical and will deepen into the some of the crucial problems that have characterized the history of the continent and that are key to understand the current developments. Topics include: cycles of political change between authoritarianism, democracy, populism and revolution; economic development and inequality; culture and society, international relations.